The history of the stud

The National Stud in Kladruby nad Labem is one of the oldest stud farms in the world while being home to the oldest Czech indigenous breed of horses - the Kladruber.

Discover the history of the Kladruber - a horse breed that was selectively bred (probably as the only breed in the world) specifically for ceremonial purposes of rulers and the tradition of which goes back at least to the 14th century.

The history of horse breeding in Kladruby is probably as old as the history of the local settlement. The Elbe river alluvial plain, the location of the Nominated Landscape, had been settled since medieval times, later than the neighbouring fertile flatlands further away from the river. The settlement of the areas along the river was the result of the exploitation of the high quality oaks. The first woodcutters obviously brought the horses with them to do the hard work. The cleared areas of the riparian forest were not suitable as arable land because of the high level of ground water and regular floods but they were ideal as pastures for horses.

The name of Kladruby nad Labem village (Kladruby = hew the logs) located on the territory of the Nominated Property indicates the first settlers were woodcutters. Kladruby nad Labem is mentioned in the year 1295 as a part of Cistercian Monastery property in Sedlec near Kutná Hora.

After 1491 Kladruby nad Labem which was a part of the Pardubice estate changed hands into one of the most important families in the Bohemian Kingdom – the Pernsteins who founded a deer park there before 1522 where horses were also kept (“horse park”). This was the continuation of the medieval tradition of horse breeding in this landscape. In 1560 the Pardubice estate including the deer park was acquired on behalf of the then ruler by the Czech Chamber (an administrative body of the Bohemian Kingdom). In 1563 the Emperor Maxmillian II of Habsburg founded a stud farm on this estate and on 6 March 1579 his successor, Emperor Rudolph II of Habsburg granted it a charter as the Imperial Court Stud Farm.

Since the early 17th century and in a close interaction with the surrounding landscape the stud farm had specialised in breeding ceremonial carriage horses of the gala carrossier type solely to satisfy the demand of the Imperial Court. The stud farm has been in operation to date and it has become the functional centre of this unique landscape. The continuity of breeding carriage horses has never been interrupted there. The ceremonial carriage horses of Kladruber gala carrossier breed have been continuously bred there since the early 17th century. 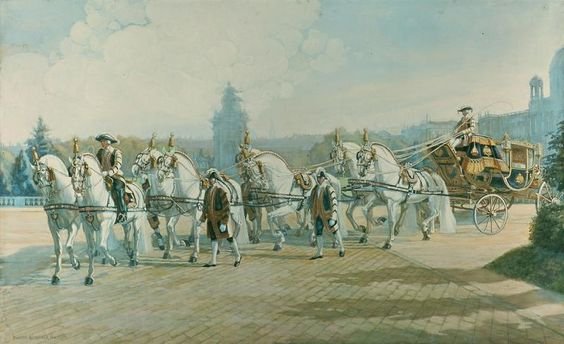 The break-up of Austro-Hungarian monarchy in 1918 at first posed threat to Kladruby stud farm owned by the Imperial family for 339 years. The Kladruber horse was traditionally connected with the pageantry of Imperial Court that new Czechoslovak Republic was so critical about. That is why in October 1918, immediately after the foundation of the independent Czechoslovak Republic, the Imperial coat of arms was removed from the southern facade of Řečany nad Labem Vrata Gate. The number of stud farm horses was dramatically reduced in 1918 and 1919.

Yet, soon it came out the Kladruber horses were needed for ceremonial purposes even in the new Czechoslovak Republic and the former Imperial Court Stud Farm was under the new political set up maintained as a state company (State Stud Farm Kladruby nad Labem) under the Ministry of Tillage. The Kladruber horse became a part of the first Czechoslovak President Tomáš G. Masaryk’s ceremonies: the coach drawn by Kladruber horses accompanied the audiences of new ambassadors, inauguration of the President and other official events such as for example the frequent state visits to the newly established republic.

After the Second World War, the stud farm became part of the State Breeding Farm. In about the middle of 20th century an agricultural training school spe cialized in horse breeding was opened in the manor house premises.

The new operational and economic requirements also triggered the extension of historical stud farm premises and thus new administration buildings and a coach house were built on the grounds of the former manor house garden. This inappropriate intervention at the former Manor House garden helped to vacate most of the Manor House rooms from administrative functions and launch their restoration. It started in 1996 by the restoration of the former imperial rooms on the of the manor house upper floor. The historical exposition became part of the visitors’ tour of the stud farm. In addition, the office of the stud farm director was returned to the manor house according to the historical tradition.

In 2007 the Kladruby nad Labem Farm Stud Farm Landscape55 was inscribed in the national indicative list for the future nomination for inscription in the World Heritage List. This act accelerated plans for the general restoration of stud farm premises as well as the work on materials necessary for the nomination. The first ever management plan was drafted in several stages and the international cooperation was reinforced. An important instrument strengthening the preservation of Nominated Landscape56 was the declaration (2015) of conservation zone Kladrubské Polabí (Kladruby Elbeland) comprising extensive territory related to the Stud Farm. Since the care for Gala-carrossier Stud Farm on national level concerns several government departments, an inter-ministerial steering group was founded in 2015 and signed and an Agreement on general principles concerning restoration and further development of the National cultural monument Kladruby nad Labem Stud Farm was signed in order to balance multiple public interests in this exceptionally valuable landscape environment.

Kladruber Horse as a historical treasure

The National Stud at Kladruby nad Labem is one of the oldest studs in the world and home to the oldest original Czech horse breed: the Kladruber horse. It covers an area of over 3,000 acres north of the river Elbe about 80 km (50 miles) east of Prague. The tradition of horse breeding in Kladruby nad Labem stretches back to at least the mid 14th century. For over 300 years (1579–1918) it was an imperial court stud providing horses for the royal and imperial court in Prague and Vienna. Nowadays the National Stud keeps around 500 horses. 250 grey Kladrubers are bred in the historic site of Kladruby nad Labem and 250 black Kladrubers are bred in Slatiňany, a former stud of the princely family of Auersperg, located about 40 kilometres (25 miles) east of Kladruby nad Labem. 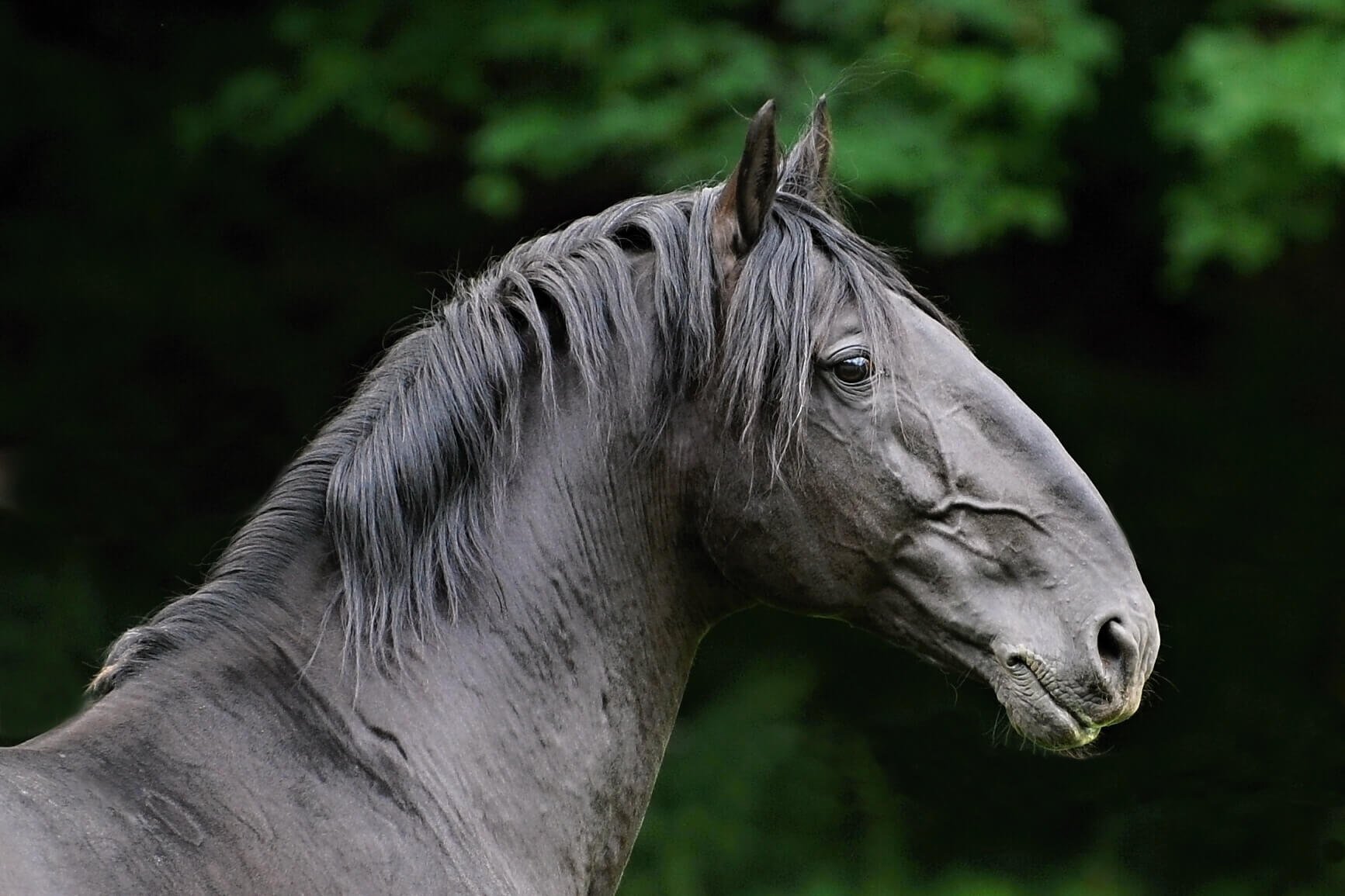 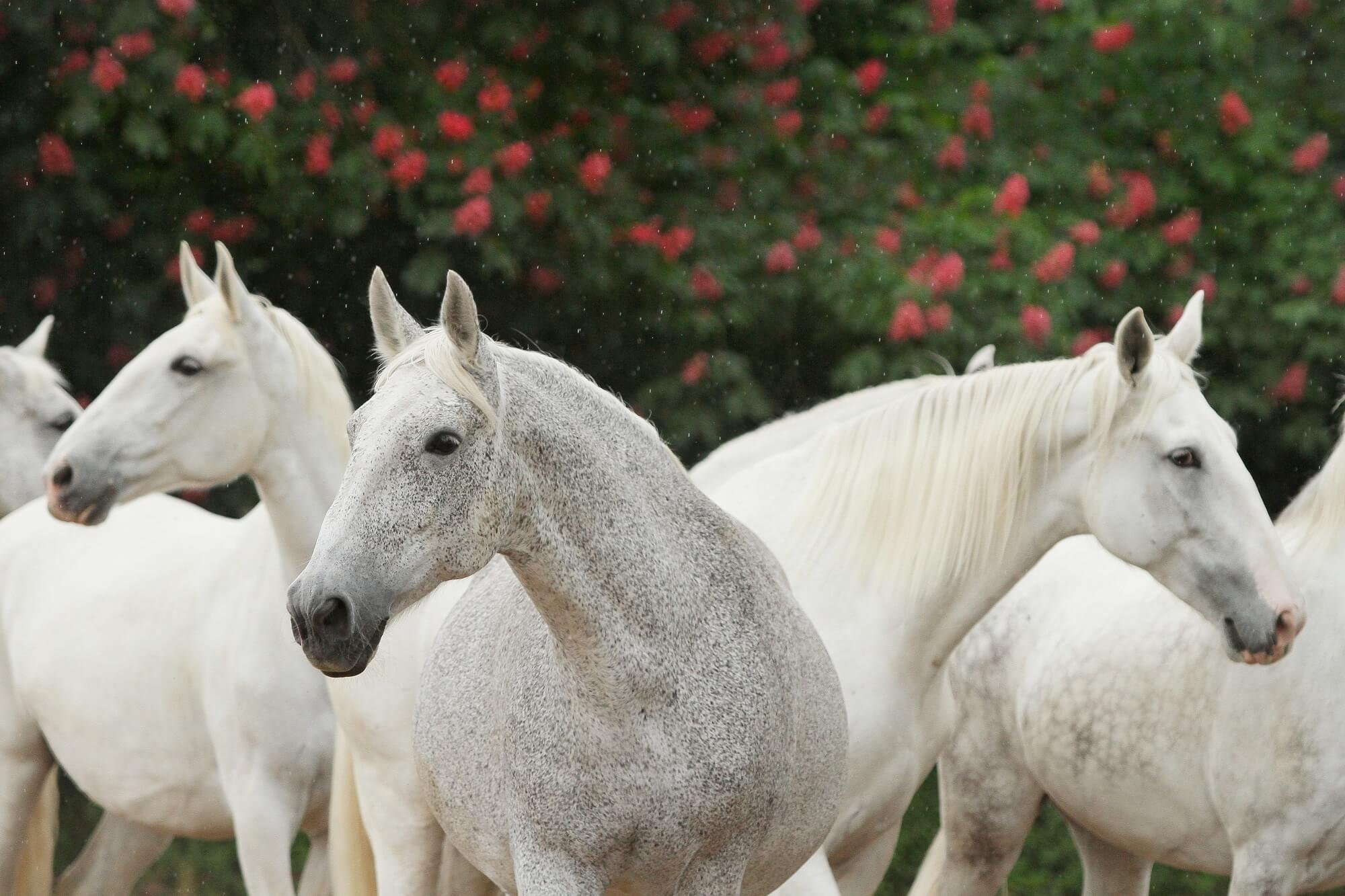 The heart of the Kladruby nad Labem site is formed by the main stables, castle and church, which are all open to visitors. The main stables are a perfectly organized classicist complex of buildings consisting of the breeding stallions stable, loose stables for broodmares, stables for young horses in training, the foaling stable, riding hall etc. Next to the stables is the imperial castle , which features a number of rooms where the Habsburg nobility stayed when they visited the stud. From the main courtyard a 3.2-kilometre (2-mile) long avenue of lime trees runs straight across the pastures to the stables at Františkov, where weaned foals are reared from 6 months to 3.5 years of age. The whole Kladruby nad Labem site represents a unique, excellently balanced cultural landscape filled with pastures, age-old avenues, irrigation channels, woods, cut-off meanders of the Elbe and historic buildings of various purposes. For its exceptional authenticity and outstanding value the Stud at Kladruby nad Labem gained the Czech national heritage site status in 2002.

The Kladruber horses are still the pivot of the life in the stud. Historically, the grey horses were used for ceremonial service at the royal and imperial court. In fact, they are probably the only horse breed in the world which was bred specifically to pull coaches of the sovereigns. The black horses were mainly used for representative service by high clergy. Nowadays the grey Kladrubers still serve at royal courts. The Danish queen, Margrethe II, uses a team of six Kladruber greys to draw her State Coach on festive rides in Copenhagen. In Sweden, the Kladrubers carry the trumpeters of the Swedish Mounted Royal Guards. In the Czech Republic the horses can often be seen at various celebrations at Prague Castle, and they are also used by the mounted police in Pardubice, Ostrava and Prague. The horses also excel in combined driving competitions and dressage. For their calm nature they are great for recreational driving as well as hippotherapy.

In 2015 an extensive two-year restoration of the Stud was successfully completed, and most of the site regained its splendid early 19th century look. Seventeen main historic buildings were renovated, new expositions created and opened to the public. Apart from the standard guided tours, the National Stud organizes a number of special events throughout the year, where you can see the Kladruber horses in action. The most notable among these are: Rudolph Cup, an international combined driving competition in April; Kladruber Horse Day , a spectacular horse show in late May; Grand Riding Day, a traditional equestrian show in late June; Kladruby Naruby (i.e. Kladruby Inside Out), a family fun festival in early autumn; and St. Hubertus Ride, a mock hunt marking the end of the equestrian season. 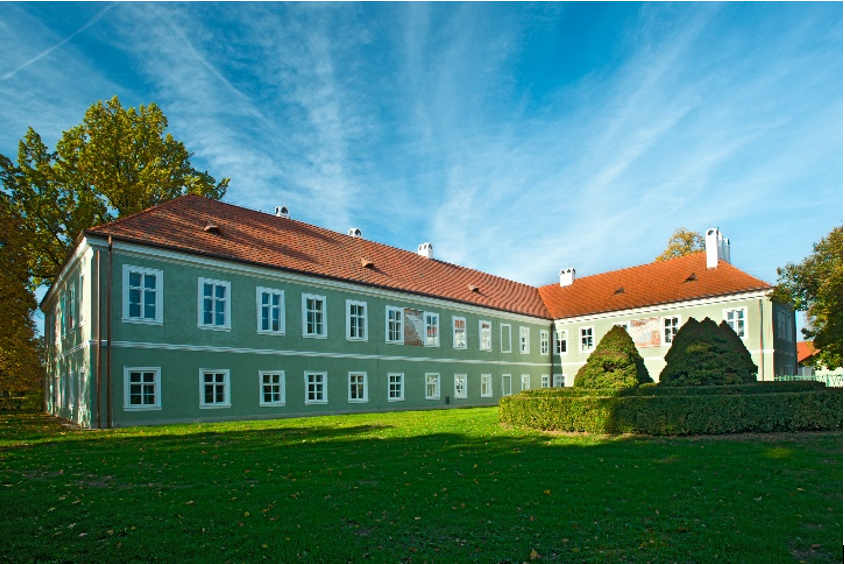 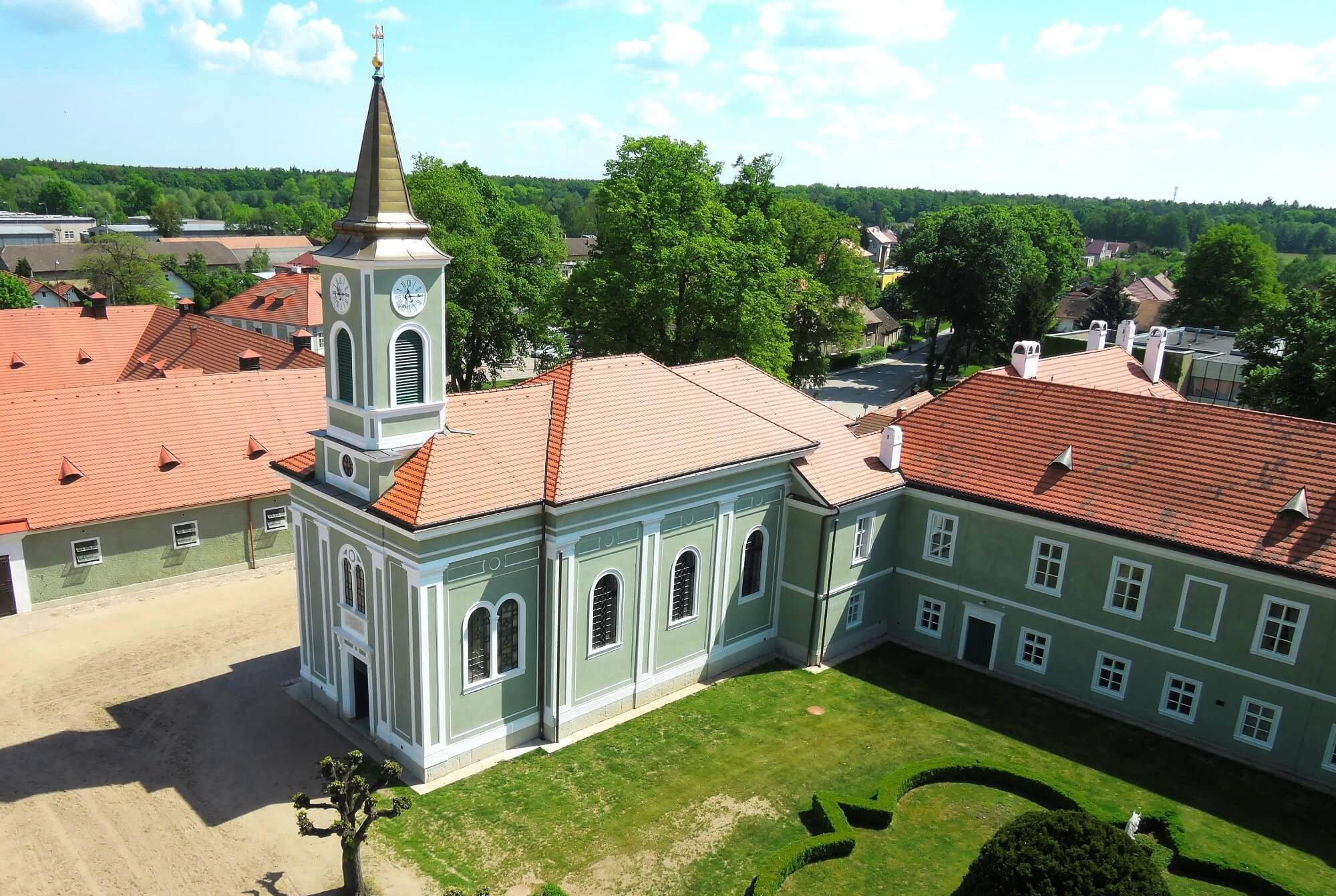 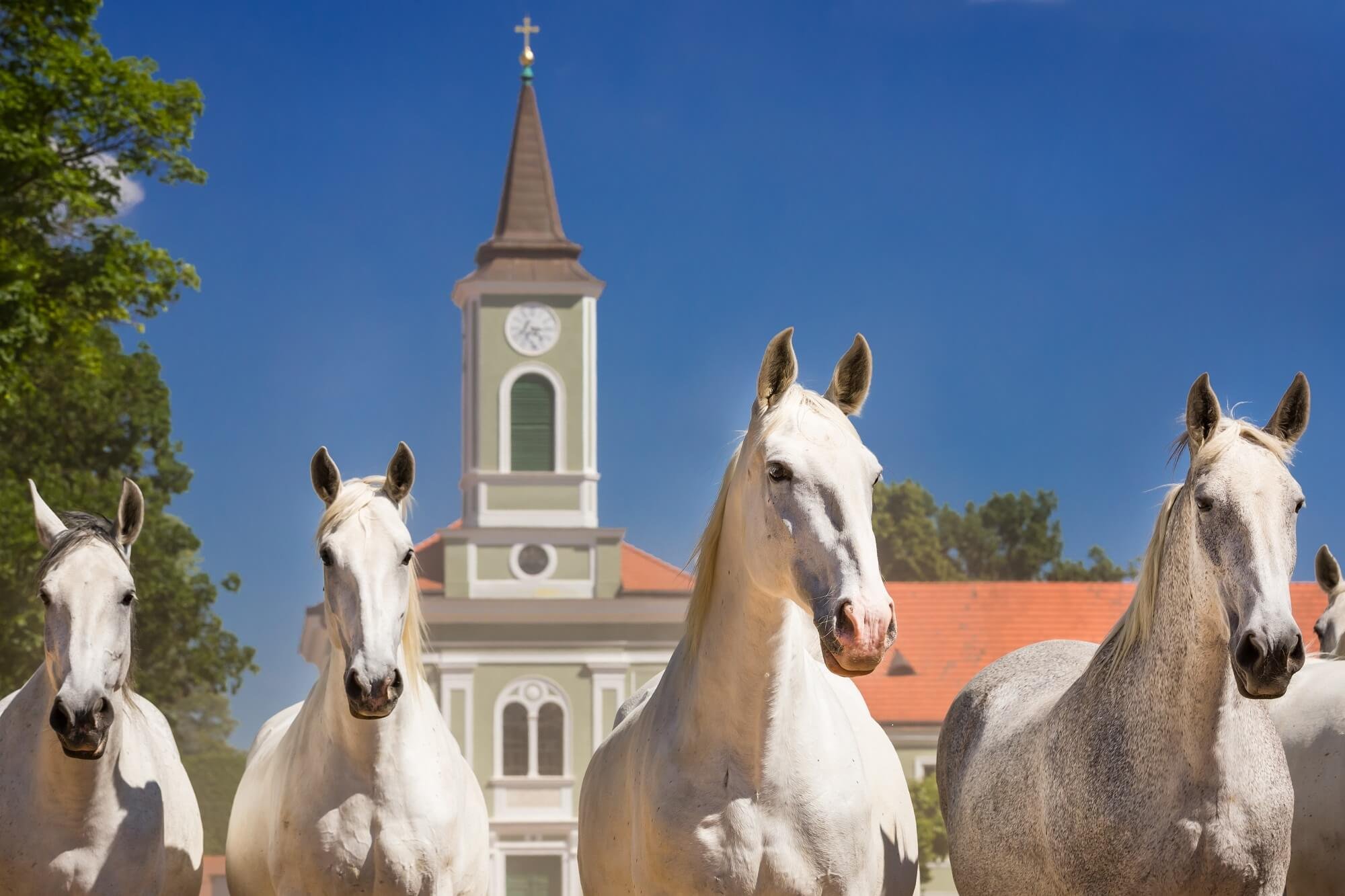 The history of Slatiňany Stud

Set up as a chateau stud in 1898, the Slatiňany establishment is located on the northern edge of the town in the chateau park. It was made out of what was initially stables for racehorses and horses used for par force hunting; they were the property - along with the adjacent chateau and demesne - of the Auersperg Family.

The chateau now houses a museum of hippology with extensive collections. The stables in Heřmanův Městec opposite the chateau belonged, in turn, to the Kinský family. After the end of the Second World War and once the facilities were taken over (August 1945), black Kladrubers that had been undergoing regeneration in Průhonice near Prague from 1939 were moved into the stables in Slatiňany on foot. State Experimental Stud Farm in Slatiňany was formed and the regeneration of the breed continued and was completed in 1973. In 1948, the stud was renamed to become Experimental Horse-breeding Station in Slatiňany and it carried out research activities until 1992.

The Slatiňany stud has been keeping and breeding Kladruber Horses in its black form for more than 65 years. The Kladruber ranks among the Baroque race of horses; the breed is of Spanish-Neapolitan origin and was produced for ceremonial purposes of royal courts. The history of the breed dates back to 1579; the stock of black Kladrubers, however, was interrupted and - in 1931 - almost completely destroyed. 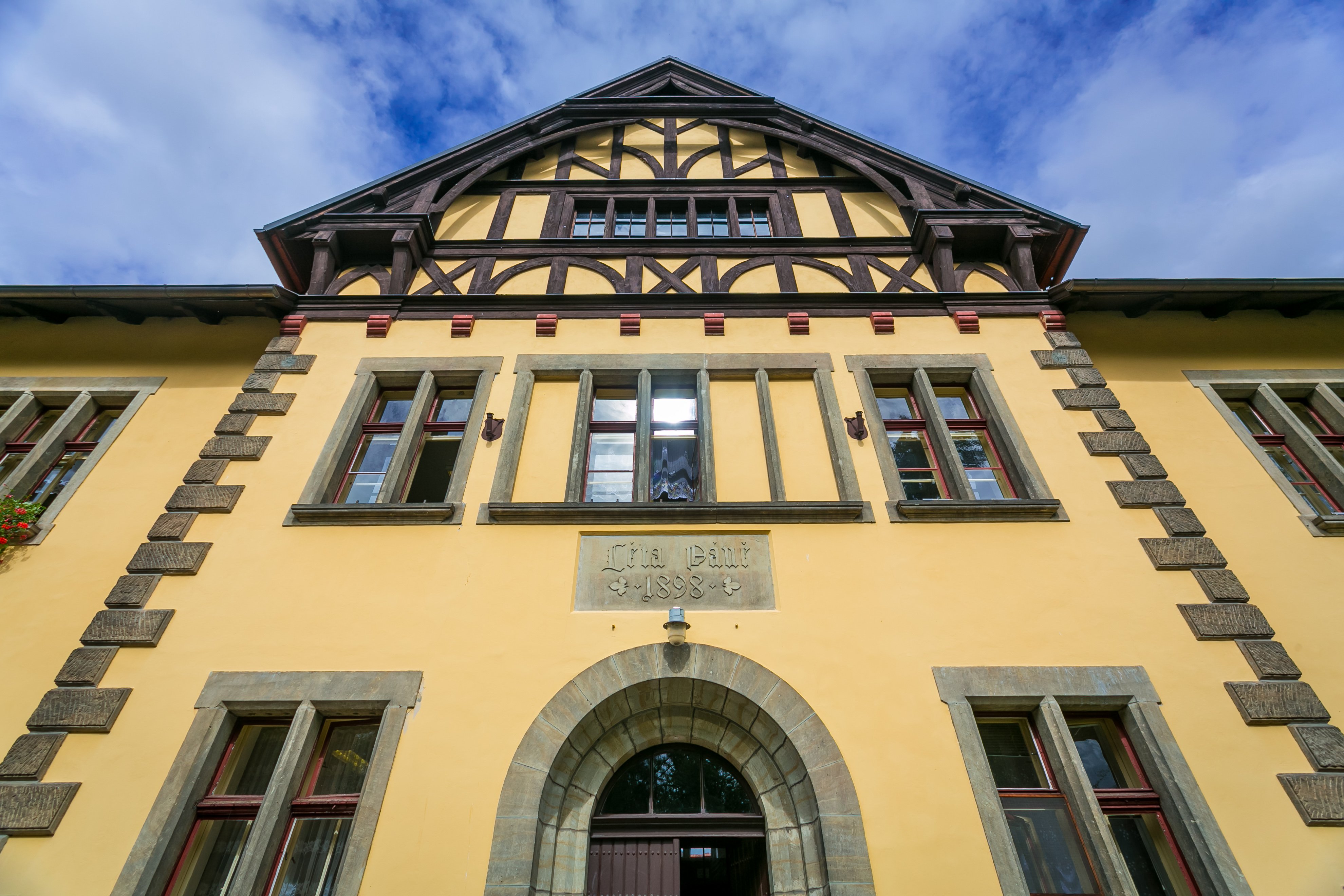 How the black Kladruber was reborn

Thanks to Prof. F. Bílek from the University of Agriculture in Prague, who gathered the last remnants of black horses as part of a unique regeneration project, these “black pearls” of the Czech horse breeding history can now be admired as well. The project was launched in 1939. Initially, it took place in Průhonice near Prague; subsequently, Dr. Lev Richter took over in 1945 to continue the efforts in Slatiňany and complete the regeneration process in the 1970s along with Jaromír Dušek and other colleagues. Animals that became involved in the activity included, in addition to grey Kladrubers, a black Lipizzaner stallion, Siglavi Pakra, and a Friesian stallion, Romke, these started two new foundation stocks in addition to the two original stocks, Sacramoso and Solo - the latter emerged in the 1930s by splitting off the Sacramoso stock.